Whitesboro senior wrestler Jeff Robinson had a record night on the mat on Jan. 29, and it was only fitting that he did it during his last home match of his high school wrestling career during senior night with a packed crowd in attendance.

Robinson has wrestled for the Boys Varsity Wrestling team since 8th grade and has a career record of 138-42. With his 138th win, he tied the school record for career wins, which has been held by Mike Sardo since 2011.

Robinson has a shot to break that record as he heads into post-season at the Class A tournament in Watertown on Feb. 8. Robinson will be looking to claim his third Class A title crown and is seeking a sectional title in his final year on the high school mat.

Robinson is one of the top seeds in Division I in the 132-pound weight class, and he was a sectional finalist last season. He has placed at the Section III tournament every season that he has been on the varsity roster at Whitesboro.

Congratulations to Jeff Robinson on his record-tying win, and best of luck after high school! 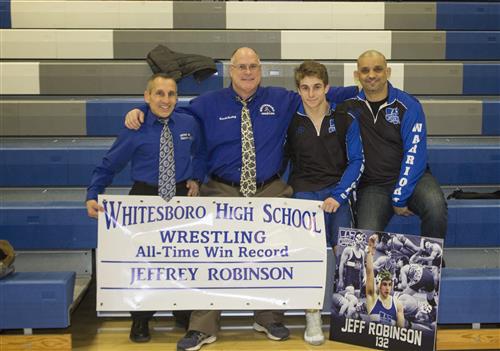